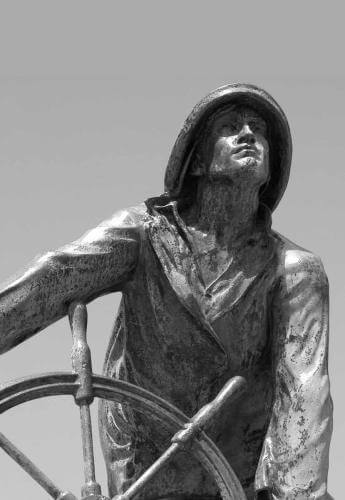 The fishermen began to mingle with the crowd about the town-hall doors— blue-jowled Portuguese, clear-eyed Nova Scotians and men of the Maritime Provinces; French, Italians, Swedes, and Danes, with outside crews of coasting schooners. ‘We lose one hundred a year from Gloucester only, Mr. Cheyne,’ she said— ‘one hundred boys an’ men; and I’ve come so’s to hate the sea as if ’twuz alive an’ listenin’. God never made it fer humans to anchor on’.”

Captains Courageous was “not all reportage. I wanted to see if I could catch and hold something of a rather beautiful localized American atmosphere that was already beginning to fade.” Kipling visited Gloucester briefly four times between 1894 and 1896. Continue to Stacy Boulevard to see the Fisherman at the Wheel by Leonard Craske.

The Man at the Wheel Memorial Sculpture

The heroic bronze sculpture (larger-than-life at 1-1/2 monumental scale) of a Gloucester fisherman clad in oilskins and standing at the wheel of a schooner is dedicated with Psalm 207 “They that go down the sea in ships.”

In 1923, all of Gloucester was abuzz gearing up for its historic 300th anniversary. Tribute plans included the grandeur and build out of Stacy Boulevard, schooner races so festive and popular they gave rise to Eastern Point Yacht club, and enduring businesses and organizations like the North Shore Arts Association (NSAA) yearning to open for the first time. Artistic commissions and competitions were held to commemorate this historic anniversary.

As early as the 1880s, the community discussed commissioning a fitting work of art that would memorialize the thousands of fishermen lost at sea in the first centuries of Gloucester’s history, as well as a public work of art in tribute to the wives and families. Although the latter commission would take many more decades until fabrication (see Morgan Faulds Pike sculpture Fishermen’s Wives), in 1923 the Gloucester Tercentenary Permanent Memorial Association sponsored the artistic competition for what would eventually be this world famous Fisherman at the Wheel. Many artists vied for this commission including Anna Hyatt Huntington.

The sculptor selected was Leonard Craske and the dedication was August 23, 1925. The bronze monument consists of a nearly square base of sea green granite, carried from the famous “Blood Ledge” in the Bay View section of Gloucester. The stone is cut with a rough finish to ‘typify the rugged character of the figure’. Often called “The Man at the Wheel,” the statue was made nationally famous in the MGM classic, “Captains Courageous.” The Wall of Remembrance wrap-around cenotaph was added in 2000. The original cenotaph was hand-painted in City Hall.

Several scenes were shot in the City in October and November of 1935: the exterior of Our Lady of Good Voyage and the interior of Captain Donald A. MacCuish’s home at 5 Lookout Street. Two Gloucester schooners, the Imperator and the Mary F. Curtis, were filmed from Five Pound Island.

The schooner, the We’re Here, arrives at the Gorton-Pew Fisheries wharf. No doubt, Kipling was inspired by the name of the Lanesville vessel, the I Am Here. Manuel refers to Duncan Street as well. MGM purchased the Gloucester schooner, the Oretha P. Spinney, to sail to California for more scenes. Former occasional Gloucester fisherman and regatta sailor turned actor, Sterling Hayden, purchased the Spinney afterwards. Gloucester writer and veteran seaman, James Connolly, was flown to Hollywood to serve as a technical consultant. The storm scene was filmed off Mazatlan, Mexico, and additional footage was shot off the Florida Keys.

One actor was lost overboard. The 1977 television remake of Captains Courageous featured the Gloucester schooner, Adventure. It was filmed off the Maine coast. See David McAveeney’s 1996 Kipling in Gloucester for more details. Special thanks to Bob Ritchie of Dogtown Books.

Note the Lanesville Vessel titled ‘I Am Here’ 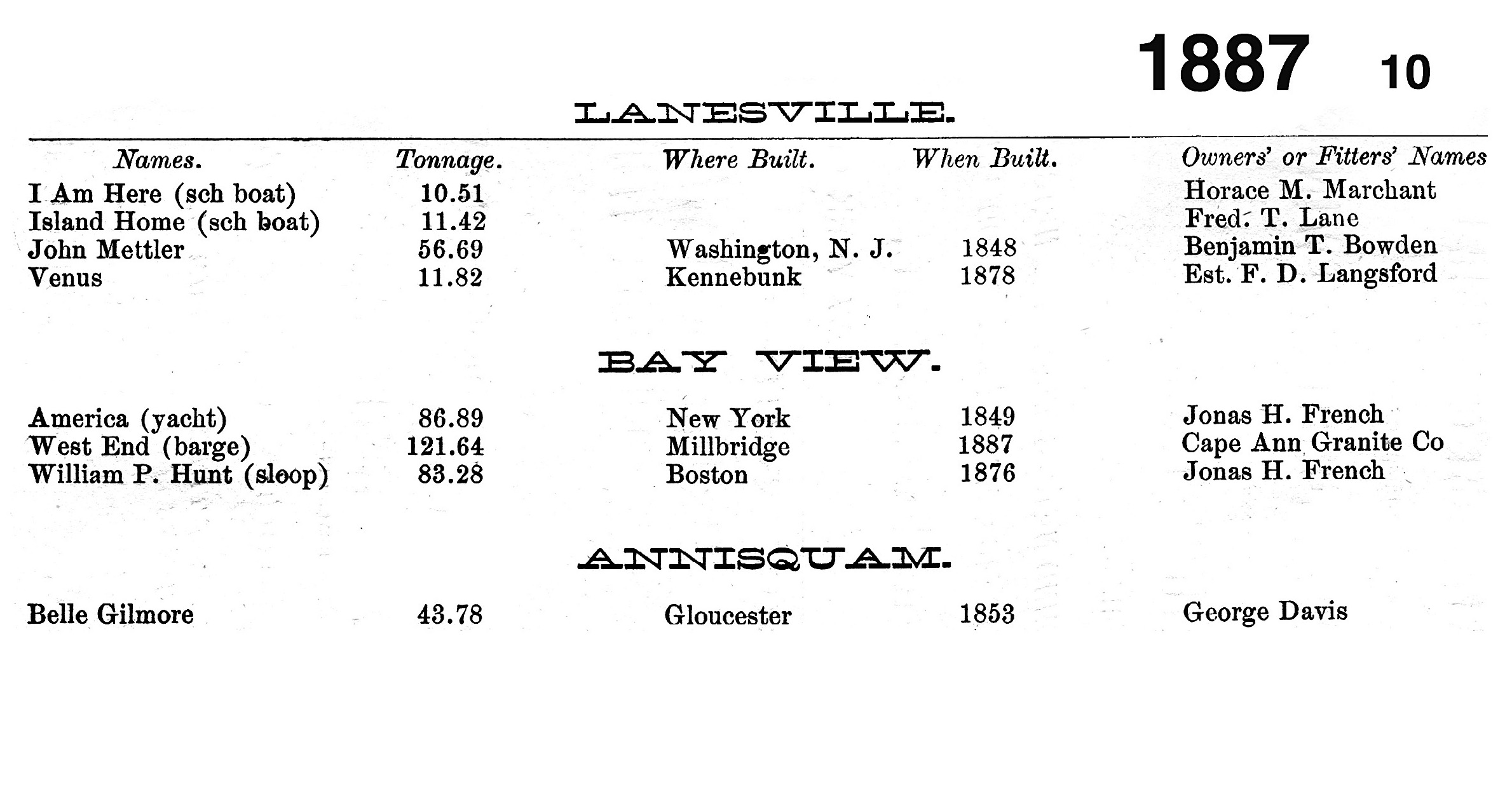 Read the 1928 official account of the genesis of the $20,000 landmark commission

In 1928 this essay was reprinted by the Gloucester Chamber of Commerce, Gloucester, MA

In 1959, this essay was reprinted for the school children of Gloucester by the Information Office, U.S. Bureau of Commercial Fisheries

In 2011, a copy of the 1959 facsimile, Gloucester Archives, City Hall, Gloucester, MA, was scanned for the HarborWalk