The eminent artist, Anna Vaughn Hyatt Huntington, had Gloucester roots and French ties. In 1910 when Huntington first entered a life-sized plaster of Joan of Arc into a Paris Salon competition, she found that some of the judges doubted that she worked without a man’s help. The entry cemented her career and brought her first major commission of an even larger Joan of Arc in New York City. This 1921 cast in Legion Square was dedicated to Gloucester men who fought in WWI. Other monumental casts of Joan of Arc were placed in San Francisco, Quebec, and France. 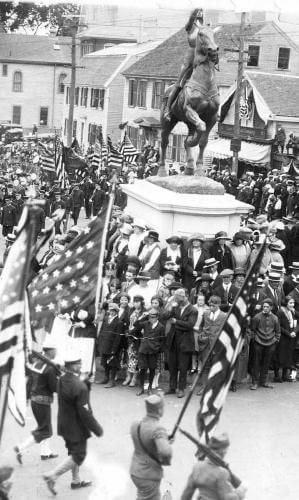 The Legion building and the Statue

The Legion building and the Statue

Before 1953, Legion Square was the linchpin to downtown Gloucester and Rockport from grand Stacy Boulevard. It remains an axis point of convergence, punctuated by two public and historic tributes.

(1) The building: Built in 1844, the Greek revival building with its stately columns sets the tone for its enduring patriotic role, first as a Town Hall, later a school, and since WWI Gloucester’s American Legion post. Gloucester’s Congressman A. Piatt Andrew founded the American Field Service and was instrumental in forming the National American Legion at this post. A. Piatt Andrew was a man of very wide-ranging accomplishments, a Francophile, and a major patron of the arts as well.

(2) The statue: In 1921, an authorized cast of Anna Vaughn Hyatt Huntington’s equestrian bronze, Joan of Arc (1915) was dedicated to honor Gloucester men (and one woman) who fought in World War I and sited to face the National American Legion post. Anna Vaughn Hyatt Huntington (1876-1973) was the first woman elected to the Academy of Arts and Letters (1932). Frederick Hall designed the base which is made from Cape Ann granite. Huntington’s grandmother, mother and sister were artists. Her father, Alpheus Hyatt was an esteemed scientist, able illustrator, long time Director for what is now the Museum of Science, and one of the founders of what is now the Peabody Essex Museum and Woods Hole, which he started in Gloucester at their Annisquam family summer home and lab in 1879. Huntington and her husband, Archer M. Huntington, founded more than 10 museums and the acclaimed Brookgreen Gardens. Her nephew A. Hyatt Mayor was a famous curator at the Metropolitan Museum of Art.

Marie Demick reads an excerpt from the 1969 Archives of American Art A. Hyatt Mayor interview.