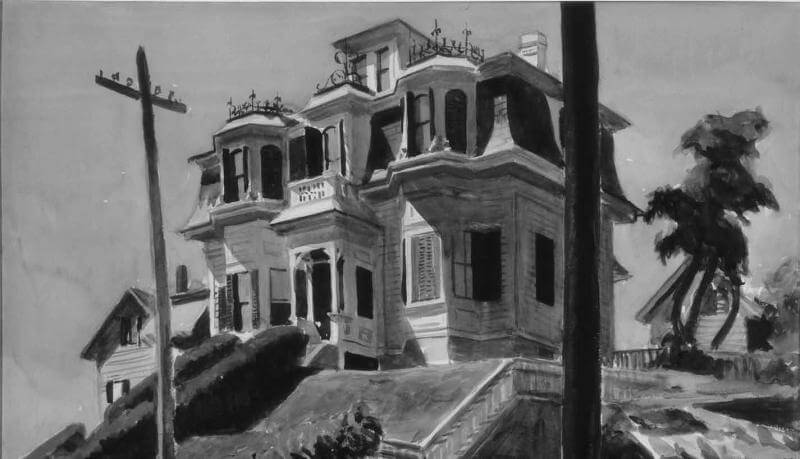 Gloucester inspired more than 110 art works by artist Edward Hopper. A painter, printmaker, and illustrator, Hopper traveled by train from his home and studio in New York City to Gloucester, with his first visit in 1912. His signature emotive and elegant style, already evident in his prints, crystallized with his summer visits during the 1920s.

There are six Hopper sites near this house at Flannagan’s Square; some depicted by other artists, including Stuart Davis and John Sloan. Look for guided walking tours of the sites in Gloucester that inspired Hopper.

Edward Hopper(1882-1967) traveled by public rail from his home and studio in New York City to Gloucester. Disembarking from the train at the Gloucester station, he would walk straight to lodgings downtown on Middle Street. Houses, views of the Annisquam River Bridge to Cape Ann, the boarding house where he stayed, the freight cars and railroad gates, and numerous other sites are still visible today. Many of them encircle the perimeter of, and points within, Gloucester’s downtown. In 1928, his last summer in Gloucester, he owned a car, a benefit from the great response and sales of his magnificent 1920s Gloucester works. 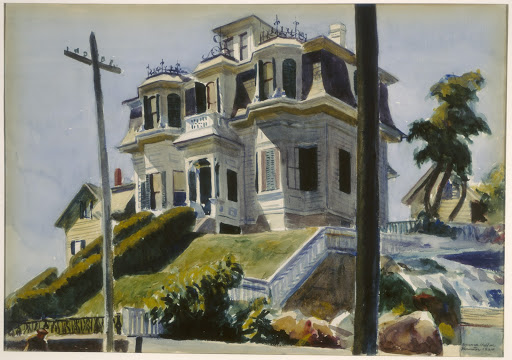 Visiting THIS story post you’ll see Hoppers’ Haskell house as well as the Crow’s Nest,  but if you turn around you will find:

Rose Marine founded by the late Frank Rose, III in 1964 which has been a leader in the marine maintenance/repair industry ever since. You can see all manner of vessels at drydock and commercial ones such as Wicked Tuna. Renowned Whale Watch tours with naturalists aboard also leave from the neighboring dock.

Cruiseport/Seaport Grill and Gloucester Marine Terminal center, which is one of only three private Homeland Security Ports in the United States (international cruise ships). Dine at the Seaport Grill or in summer months, try brunch or dinner on the Beauport Princess!!

This video was featured in the news broadcast ‘Chronicle’ about the local Crow’s Nest. The video features Jeanne Blake, a communications specialist, author, award-winning television journalist from Gloucester.