And they prayed. They walked up Prospect Street...and stood beneath the twin bell towers of Our Lady of Good Voyage church. The bell towers are one of the highest points in Gloucester and can be seen for miles by incoming ships. Between the towers is a sculpture of the Virgin Mary, who gazes down with love and concern at a bundle in her arms. This is the Virgin who has been charged with the safety of the local fishermen. The bundle in her arms is not the infant Jesus, it’s a Gloucester schooner.” 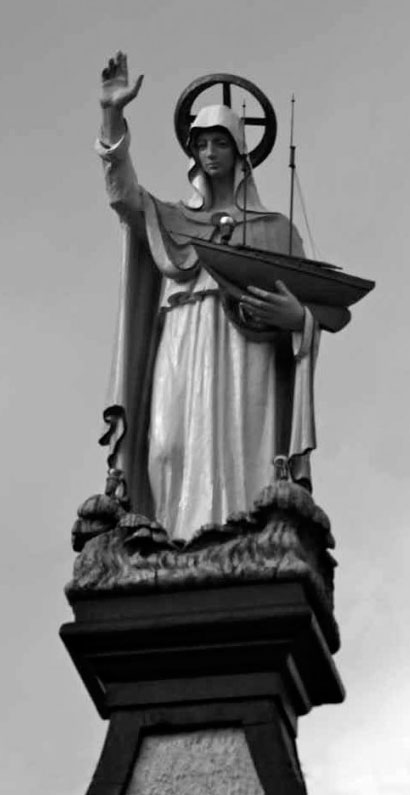 Our Lady of Good Voyage Church, with its brilliant blue domes, was modeled after the Santa Maria Madelena church, Pico, Azores. Inside, there are more than twenty-five ship models and stained glass and statuary depictions of Our Lady. The church includes one of the oldest sets of full carillon bells in the United States.

This historic Roman Catholic church was built in 1914 and added to the National Historic Register of Historic Places in 1990. The original burned down. The mission style architecture was designed by Halfdan Hanson. The Madonna and ship atop the church was created by artist Angelo Lualdi. The original is within the collection of the Cape Ann Museum; a fiberglass replica is there now.

The same foundry that had cast the Liberty Bell in Philadelphia cast the bells for Our Lady. $15,000 was raised in donations including aid from A Piatt Andrew, Isabella Stewart Gardener, Henry Davis Sleeper, Mrs. Margaret Brady Farrell, and Fr. DeBem…”25 bells such as that which it is just announced is soon to be possessed by the Church of Our Lady of Good Voyage at Gloucester, Massachusetts, will have a bass bell of about 2,240 pounds…The Gloucester carillon is to be made at the Taylor foundry above mentioned and it will be the first accurately tuned carillon in America.” In fact, there are 31 bells and each is personalized with both the name of a saint and a local person’s name. Mary Mesquita Dahlmer, daughter of Captain Joseph Mesquita, was taught to play the bells by two Belgium professors. She played for 25 years and entertained Mrs. Hugh Bancroft, John D. Rockefeller and Franklin D. Roosevelt here.

Minutes after his schooner, the Mary P. Mesquita, was plowed in half by a Cunard steamer off the Grand Banks, Captain Joe Mesquita made a vow. He promised he would give public tribute to God if his 15 crewmen were saved. Incredibly, just one man was lost from the sinking ship. Fulfilling his promise, the Captain commissioned a silver crown to renew a traditional Portuguese festival emphasizing charity and devotion. The Crowning of the Imperator is celebrated with prayers, parades, and camaraderie. The crown arrived in 1902 from Portugal and was taken to Rome to be blessed by Pope XIII. The thanksgiving processions –now there are two–occur on successive Sundays during the Pentecost season. Parade participants include a marching band and beautifully dressed children carrying banners, flowers and miniature crowns. Afterwards at Our Lady of Good Voyage, those who have promised the Holy Spirit special thanks or those who have asked for a special blessing, kneel as the silver crown is held above their heads and the priest recites, “Veni Creator Spiritus .” A special altar is displayed at the Portuguese Club and a celebratory, traditional banquet is held with the help of many hands. 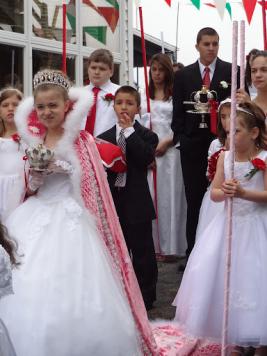 Dream like footage. National Film Registry of the Library of Congress; includes the arrival by boat of Maria and Joe Alves to Pico, Azores from Gloucester, Mass., where Maria immigrated to at the age of 16.

Images before 1914 through today 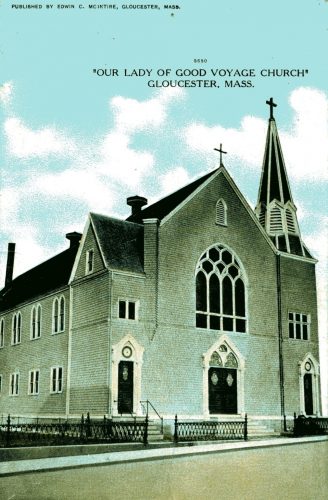 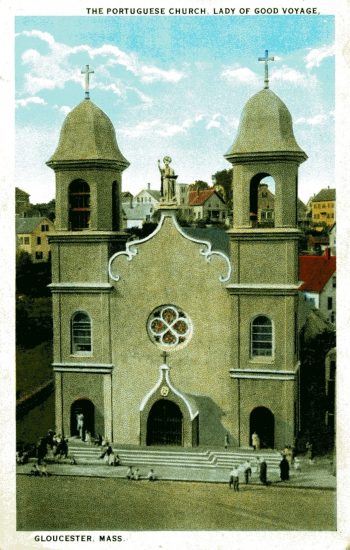 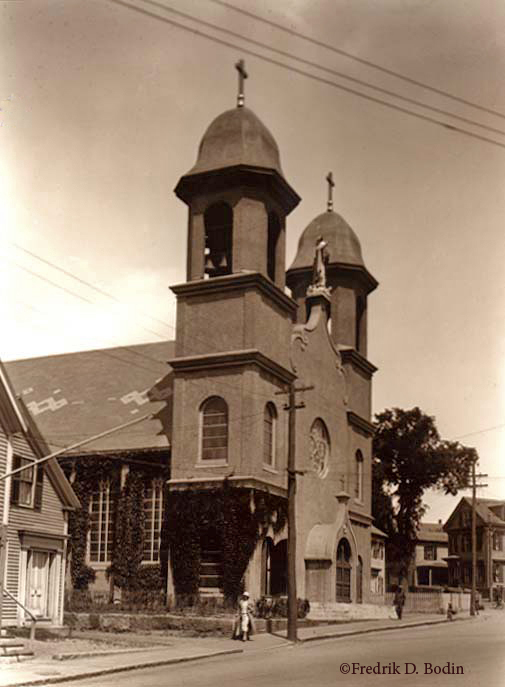 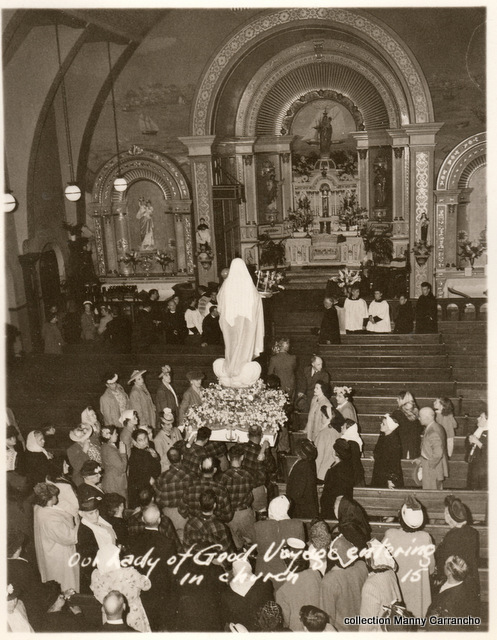 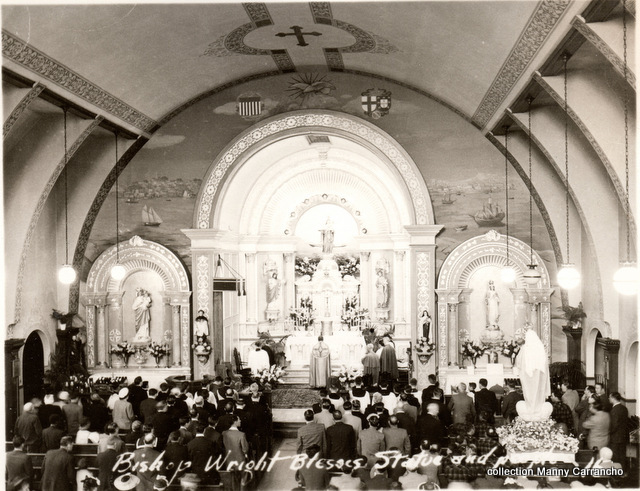 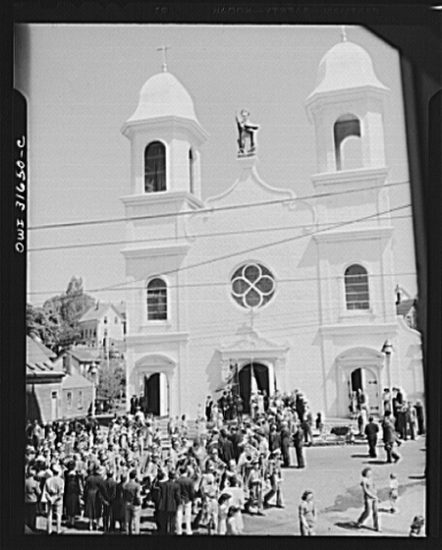 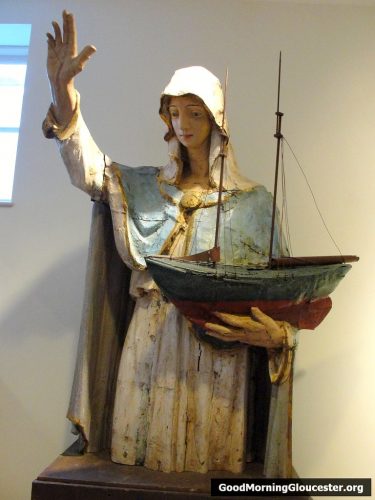 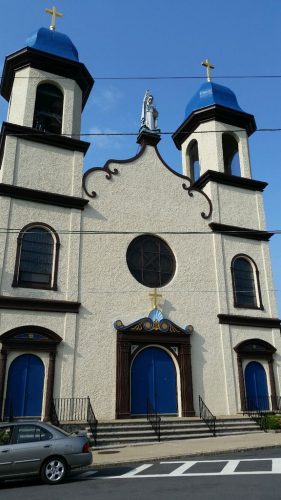 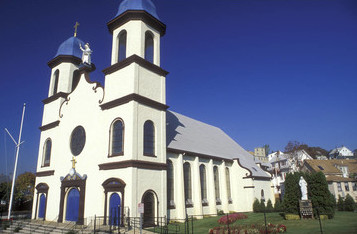 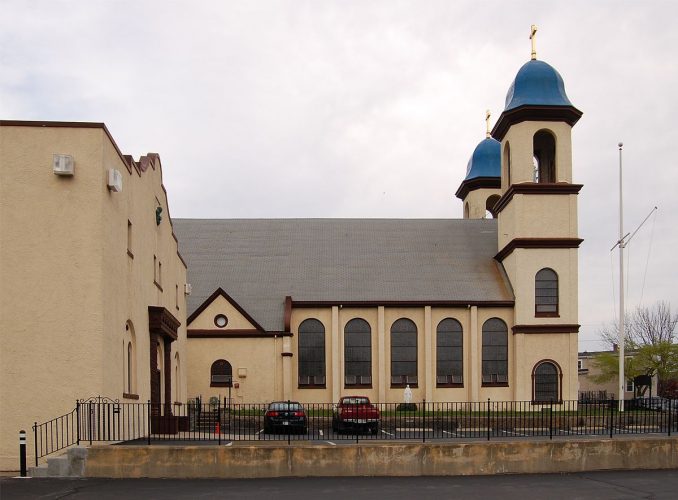 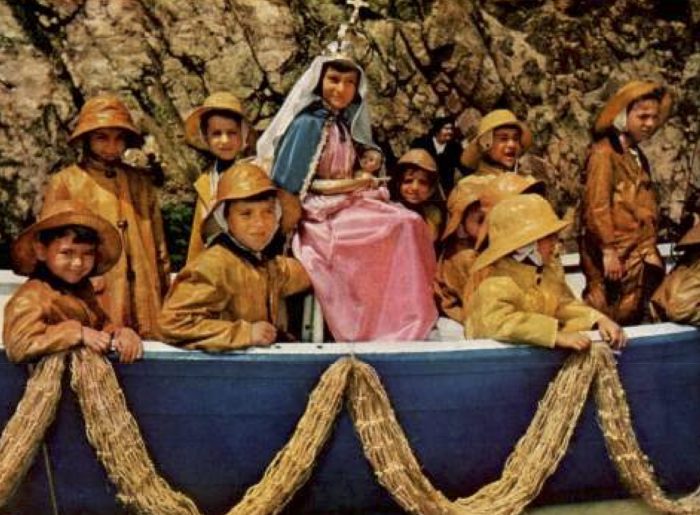