The waters of the United States are marked for safe navigation by the lateral system of buoyage. The system employs a simple arrangement of colors, shapes, numbers, and light characteristics to show the side on which a buoy should be passed when proceeding in a given direction. The characteristics are determined by the position of the buoy with respect to the navigable channels as the channels are entered from seaward. The expression “red right returning” has long been used by the seafarer as a reminder that red buoys are kept to the starboard (right) side when proceeding from the open sea into port (upstream). Likewise green buoys are kept to the port (left) side. Red buoys are always even numbered and green are odd numbered. Red and white vertically striped buoys mark the center of a channel.

About three-fourths of the way up the Atlantic coastline of the United States, Gloucester, Massachusetts, is located at 42 degrees, 35 minutes North Latitude and 70 degrees, 40 minutes West Longitude. Gloucester has 62 miles of shoreline and eight beaches.The tides go through a complete cycle every 12 hours and 25 minutes. Gloucester waters are dotted with buoys of many shapes and colors to show boaters how to safely navigate channels and avoid hazards.

You may hear 3 short blasts when a vessel is in reverse.

Introduction to the Coast Guard Station in Gloucester; their two boats and responsibilities.

Mighty Mac magazine ad sporting nautical design; Mighty Mac was another Gloucester business and family with ancillary roots to the fishing industry, deep ties to the arts, and to Gloucester.

Cape Ann Manufacturing was one of the first firms that made oil-infused clothing for fishermen. Three Bell sons took over from their father and his partner, and grew the company into Mighty Mac, nationally known for its high quality clothing. 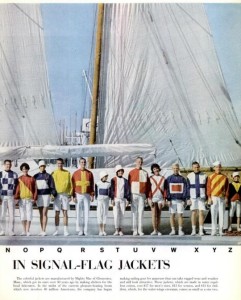