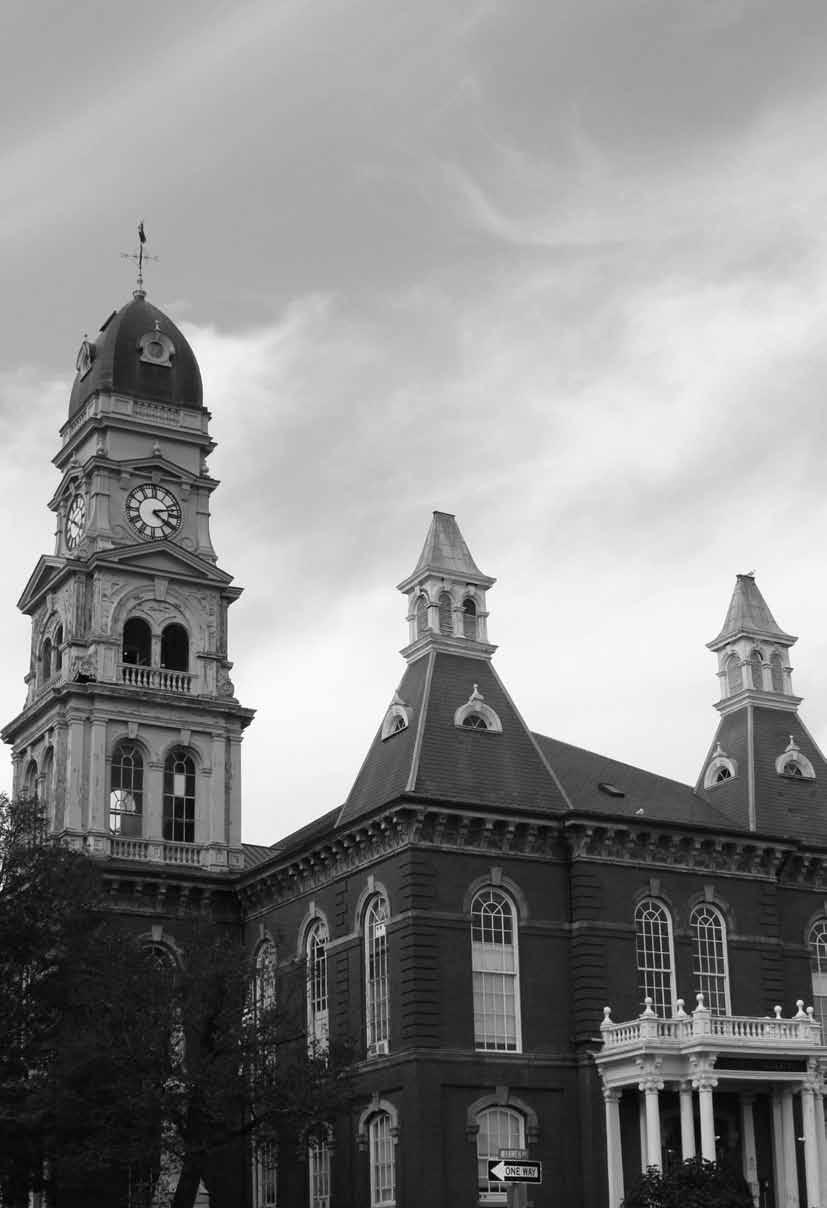 Gloucester’s magnificent City Hall building, built in 1871, is the crowning jewel of the city’s downtown and one of the oldest municipal buildings still in full service in Massachusetts. It's beautifully preserved interior contains a striking set of 1930s murals by local artists funded by the Roosevelt Administration’s depression-era Works Progress Administration (WPA). Memorials to veterans and seamen are also on display.

City Hall also houses one of the most complete municipal archives in the country, with records dating back to 1642.

“City Hall is the most historically & architecturally significant building that the City owns and a beacon to all who come to Gloucester by land or sea. Built in 1871 the building was designed by Gridley J.F. Bryant & Louis P. Rogers.The clock tower rises 148 feet above the street. Please view the many WPA murals on the first floor and in the magnificent auditorium on the second floor.Be sure to see the Fishermen Lost at Sea Memorial mural and look out over the harbor from the third floor.Note the portraits of some of Gloucester’s famous citizens including Clarence Birdseye, father of the frozen foods industry, and John Hays Hammond, Jr., father of remote control.If you need to find out more about Gloucester’s history, our archives date back to 1642, so please visit the Archives Department (run by dedicated volunteers; 9-noon each weekday).” –  Maggie Rosa, City Hall Restoration

Timeline and notes on City Hall

1866 – a new Town Hall was built at this location on Dale Avenue and was devastated by fire May 16 1869 including the loss of a stunning Fitz Henry Lane Gloucester panoramic. Dr. Ebenezer Dale was physician who died in 1834. His house was moved to Grove.

1871 – dedication current building, architects Bryant & Ross (who also designed old City Hall Boston) The building is a combination of architectural styles as befitting the ‘grand fashion’ of the time, predominantly Second Empire with Italian Renaissance Revival and Victorian Gothic in the mix.

1870 –  TOWER BELL was donated by Samuel Sawyer in 1870 and fabricated by Jones & Co, Troy, NY. A  bell ringer was on the City payroll. The tower measures 148 up from ground. Inside City Hall: the cast iron bell inside was donated by Gloucester, England (city for which we’re named)

1873 – Gloucester is incorporated as a City. The first Mayor elected – Robert R. Fears

1884- Samuel Sawyer donated building for the library (lyceum founded 1830). In 1764 Thomas Saunders, a merchant and state representative built a sturdy house on the corner of Dale Avenue and Middle Street.  In 1884 Mr. Sawyer purchased this prominent residence and donated it to the library corporation. Today this library continues as a public charitable corporation as designated under a charter granted by the Commonwealth of Massachusetts, June 10, 1872.

1889-1939 Central Grammar School operated as the high school. In 1939, a new Gloucester High School was built on the city dump. Central Grammar was used as school through 1971. Now it’s senior residences.

1893 – the interior clock was donated by Nathaniel Webster. 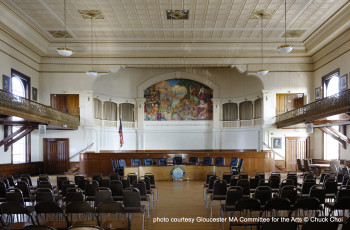 Charles Allan Winter staged study and documentation photographs as part of his working process—choosing and posing models; selecting props, and orchestrating every detail. Compare these alongside the completed murals installed at City Hall.  Courtesy  © Cape Ann Museum of Art 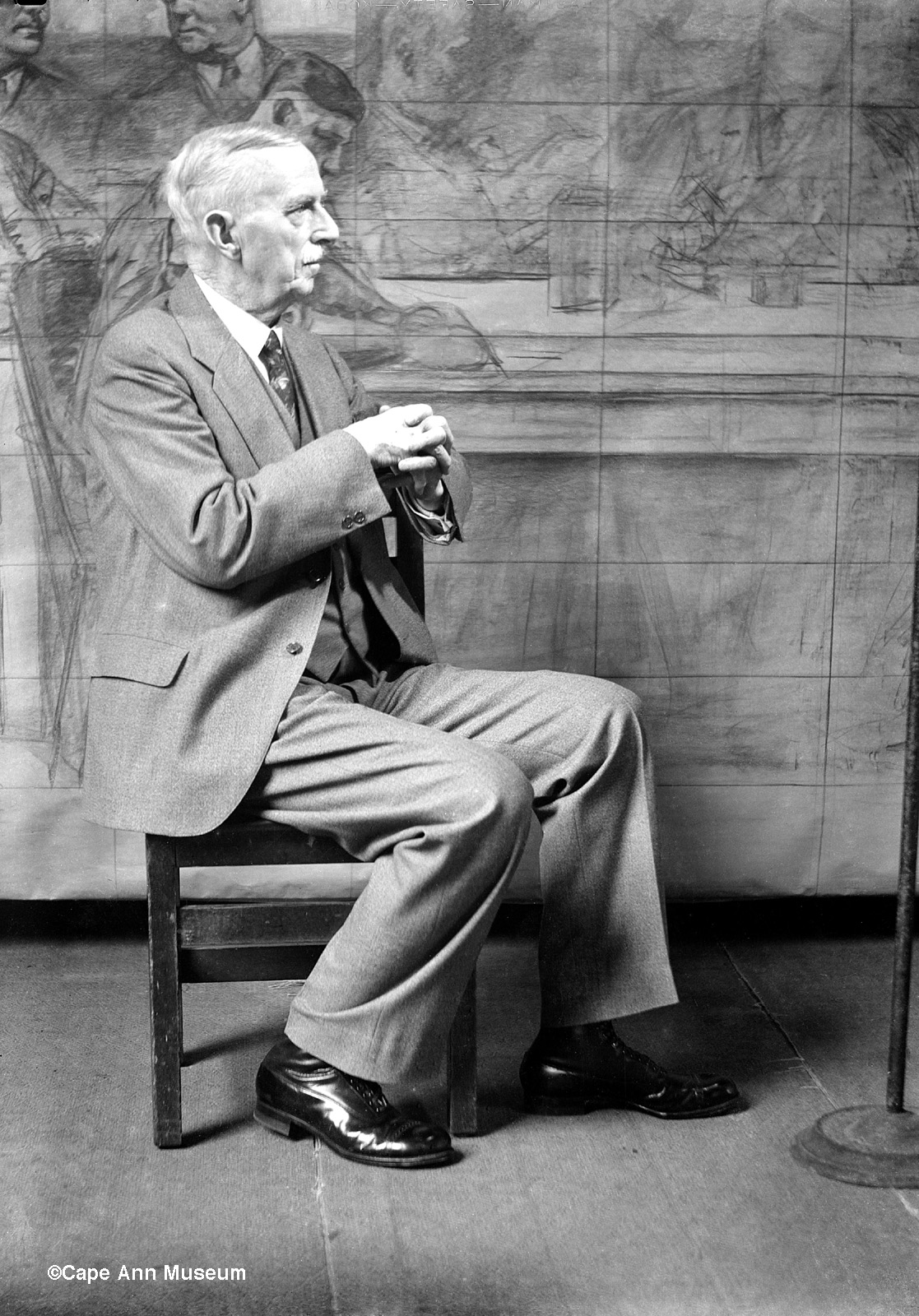 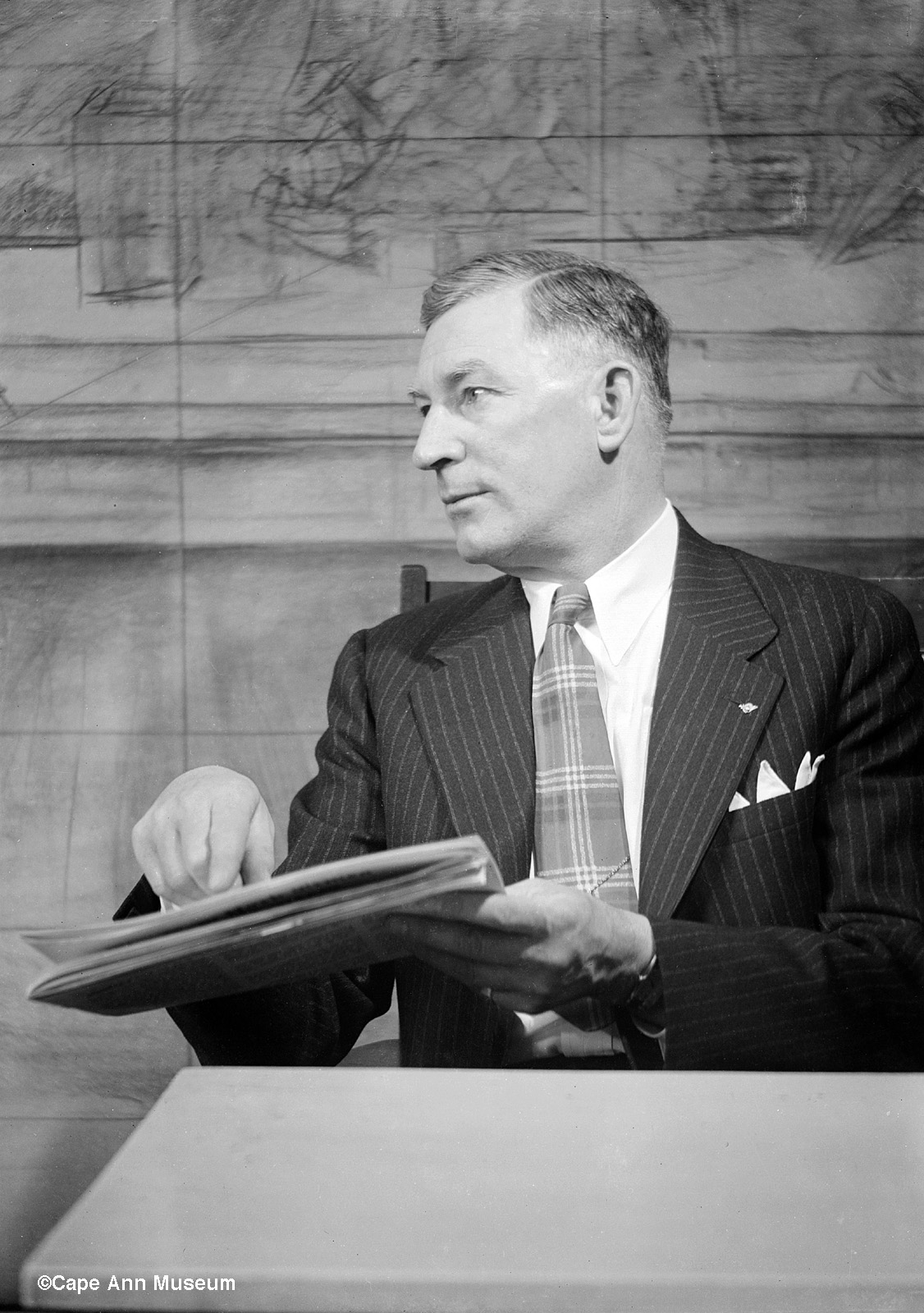 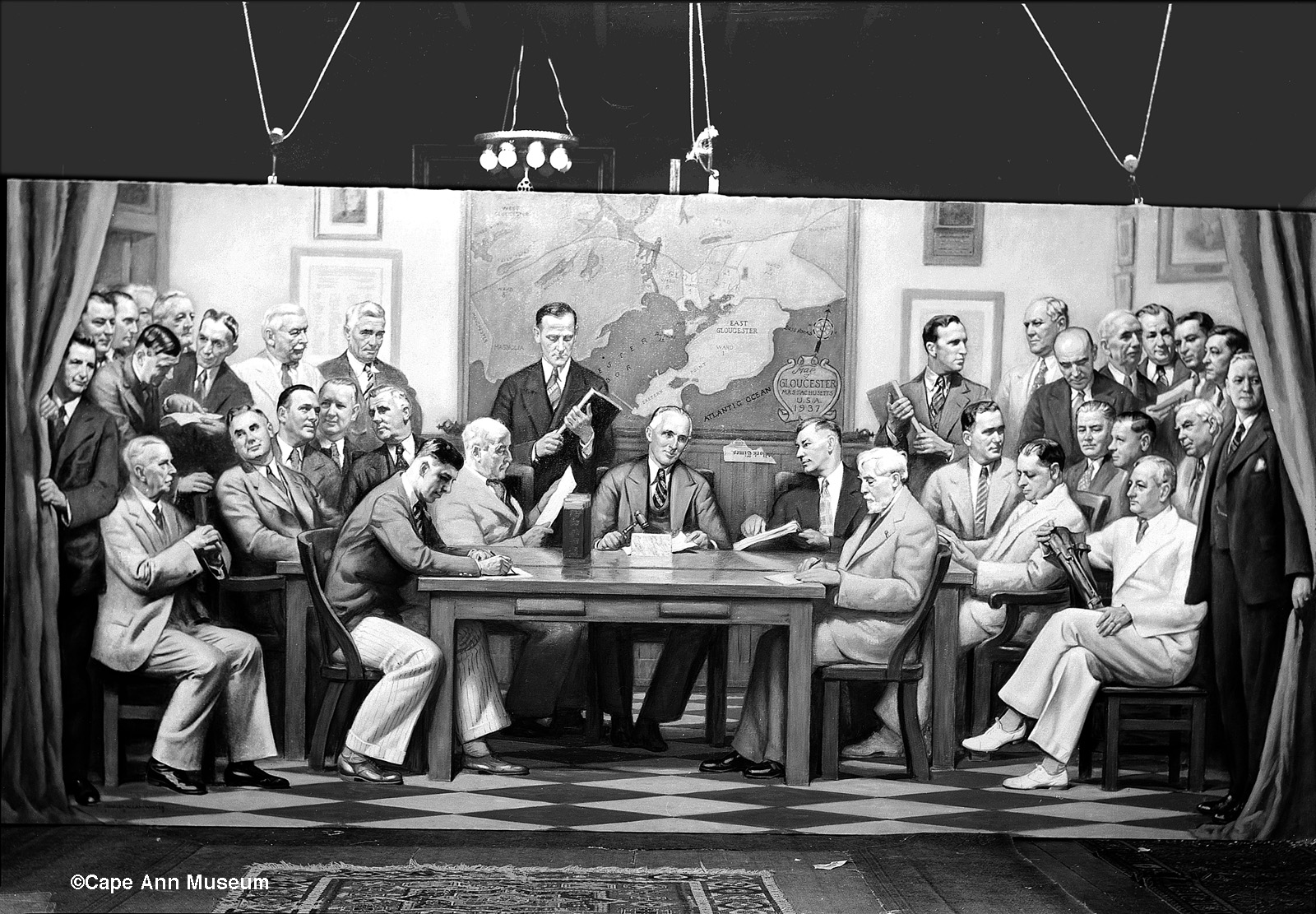 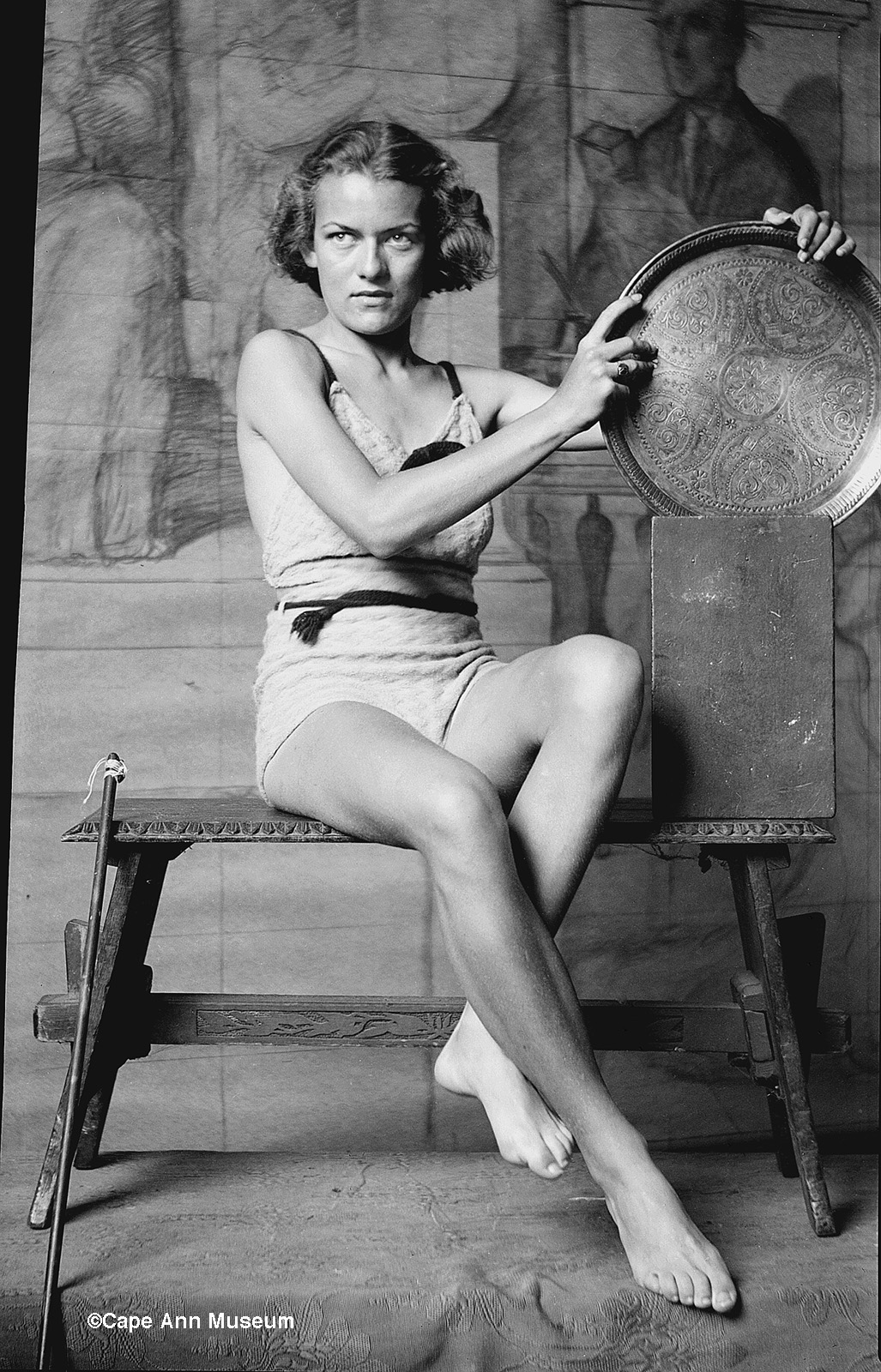 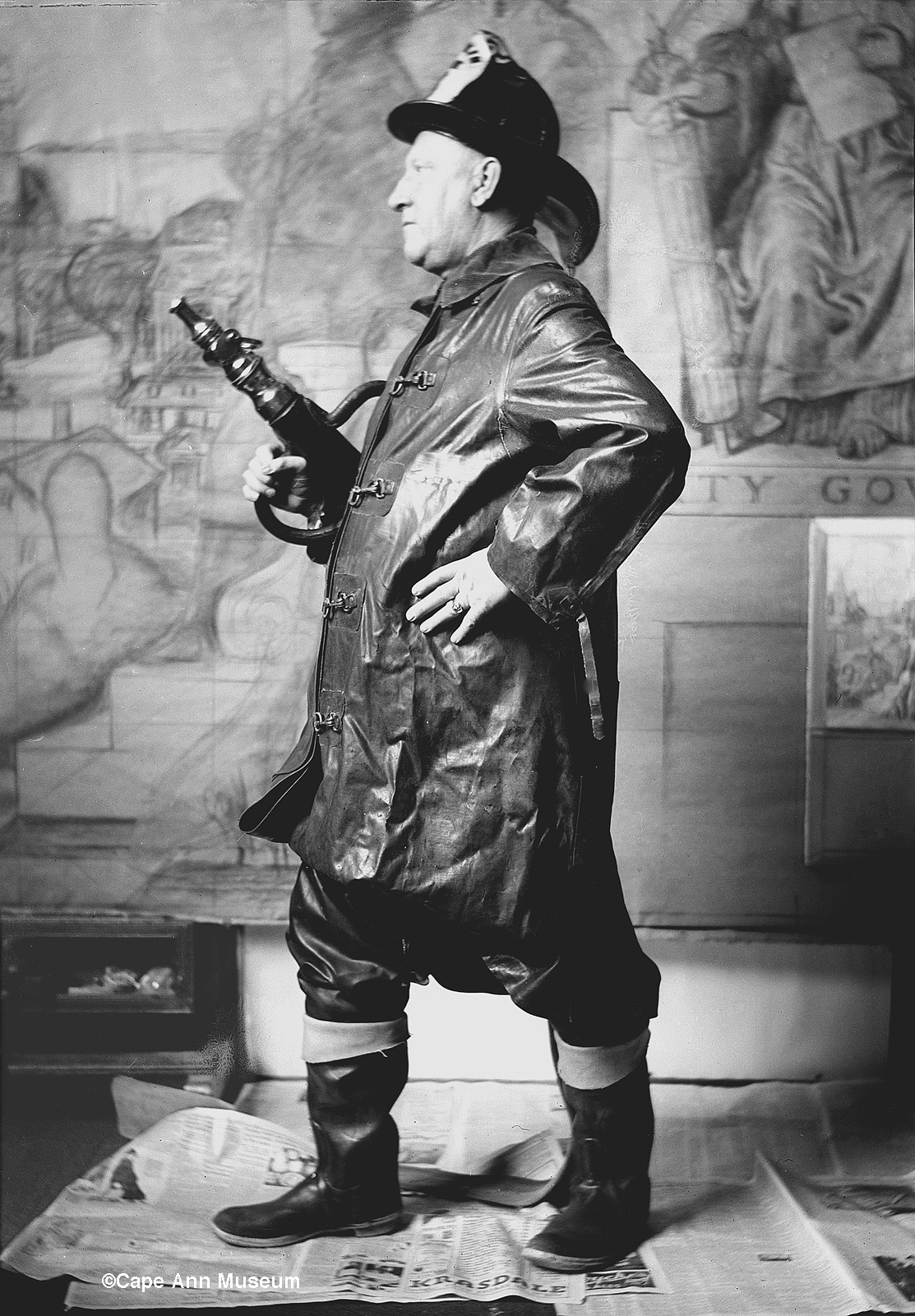 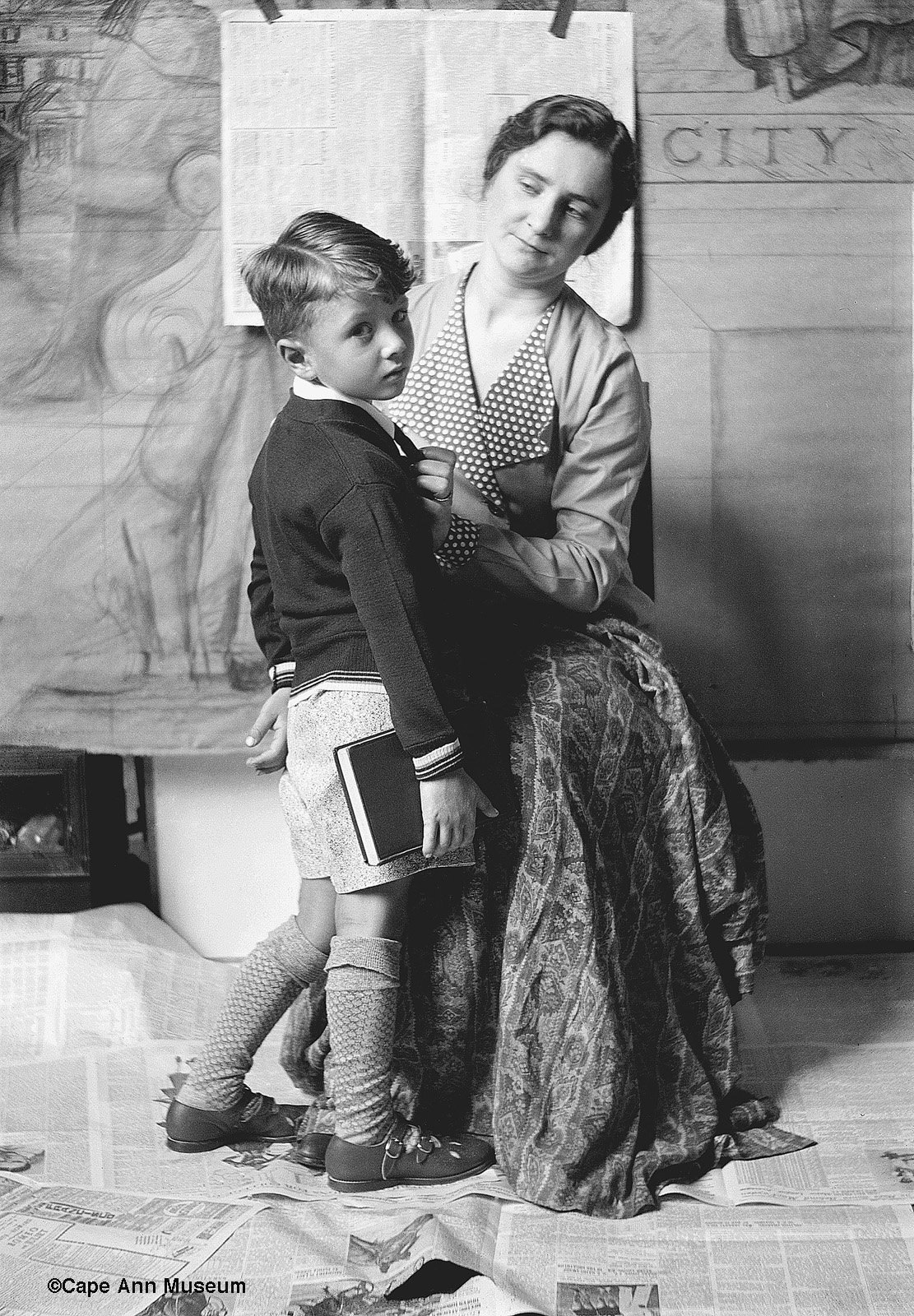 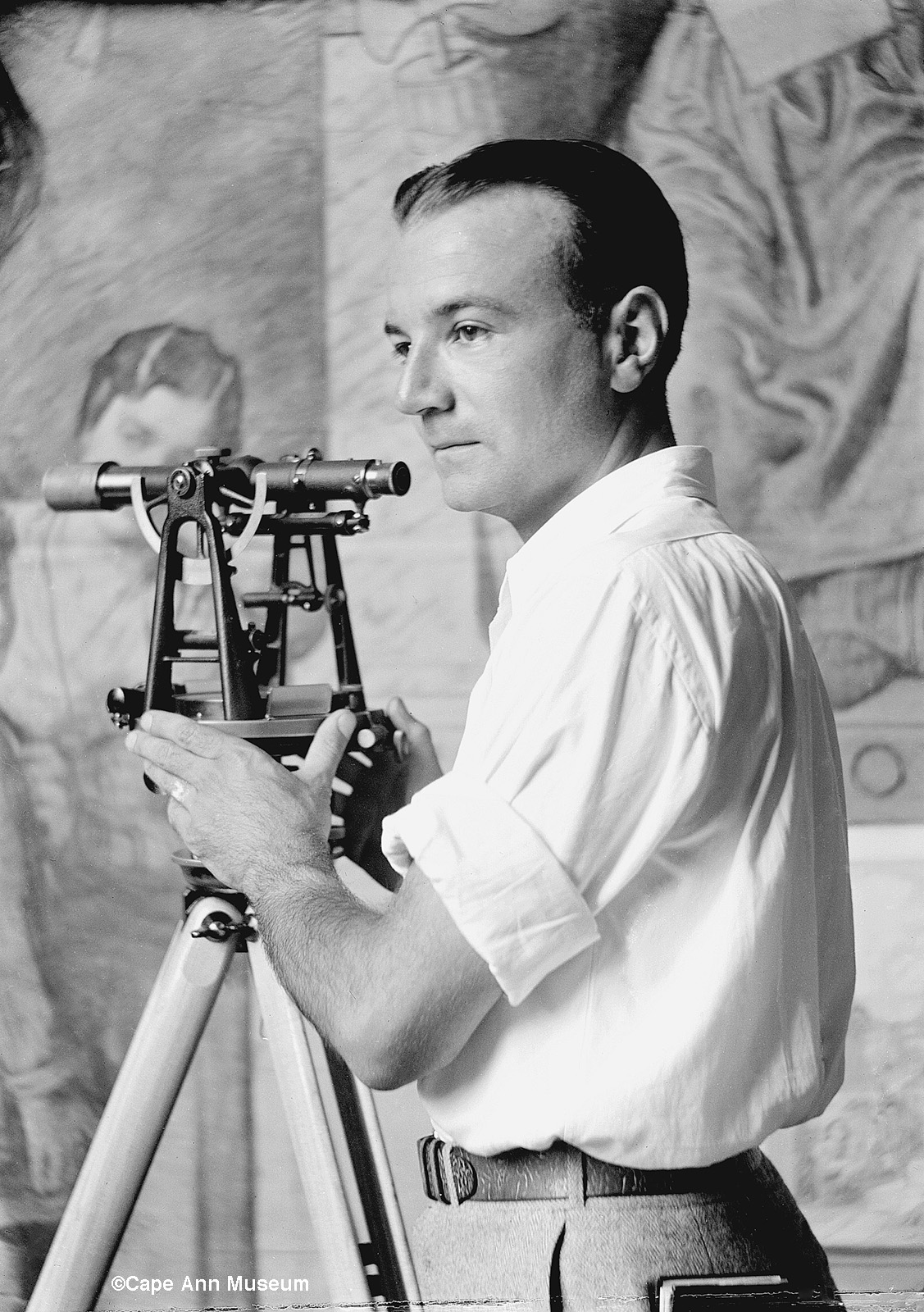 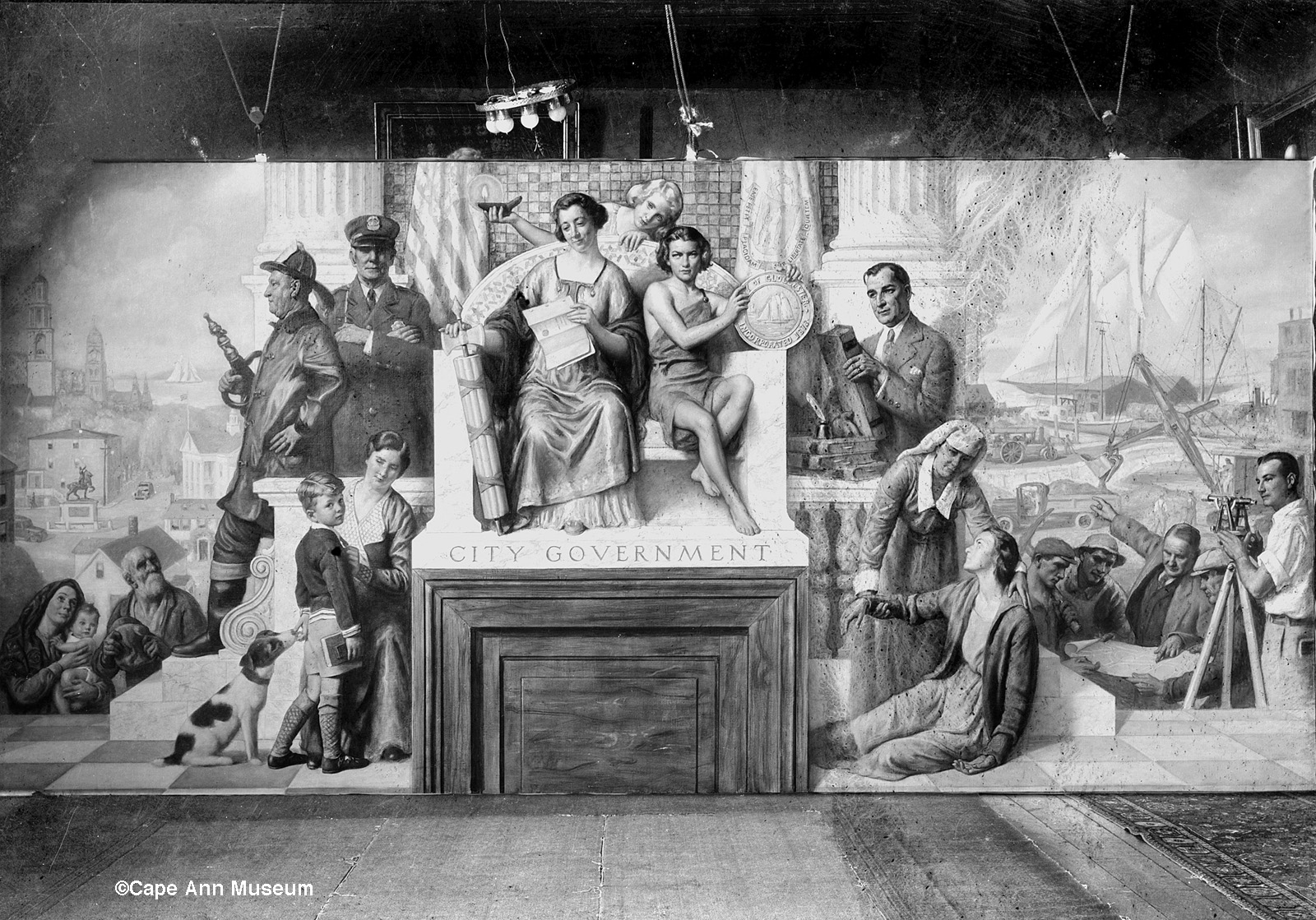 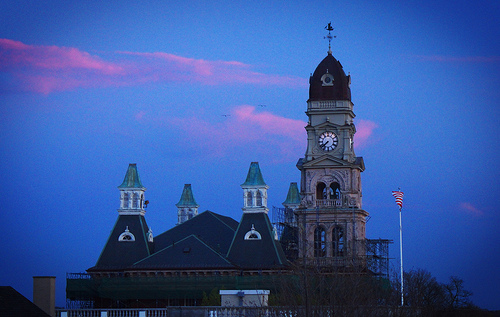 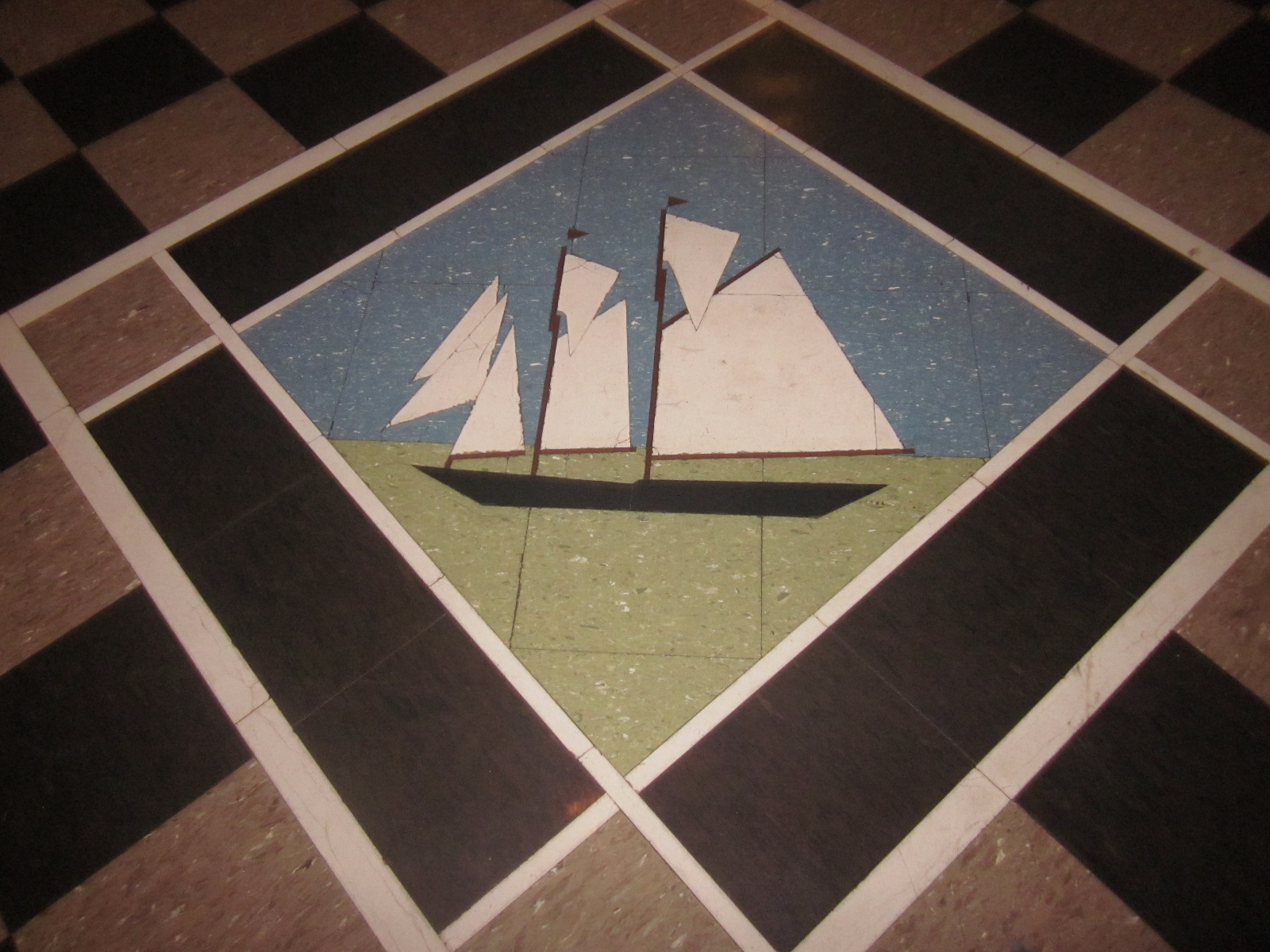 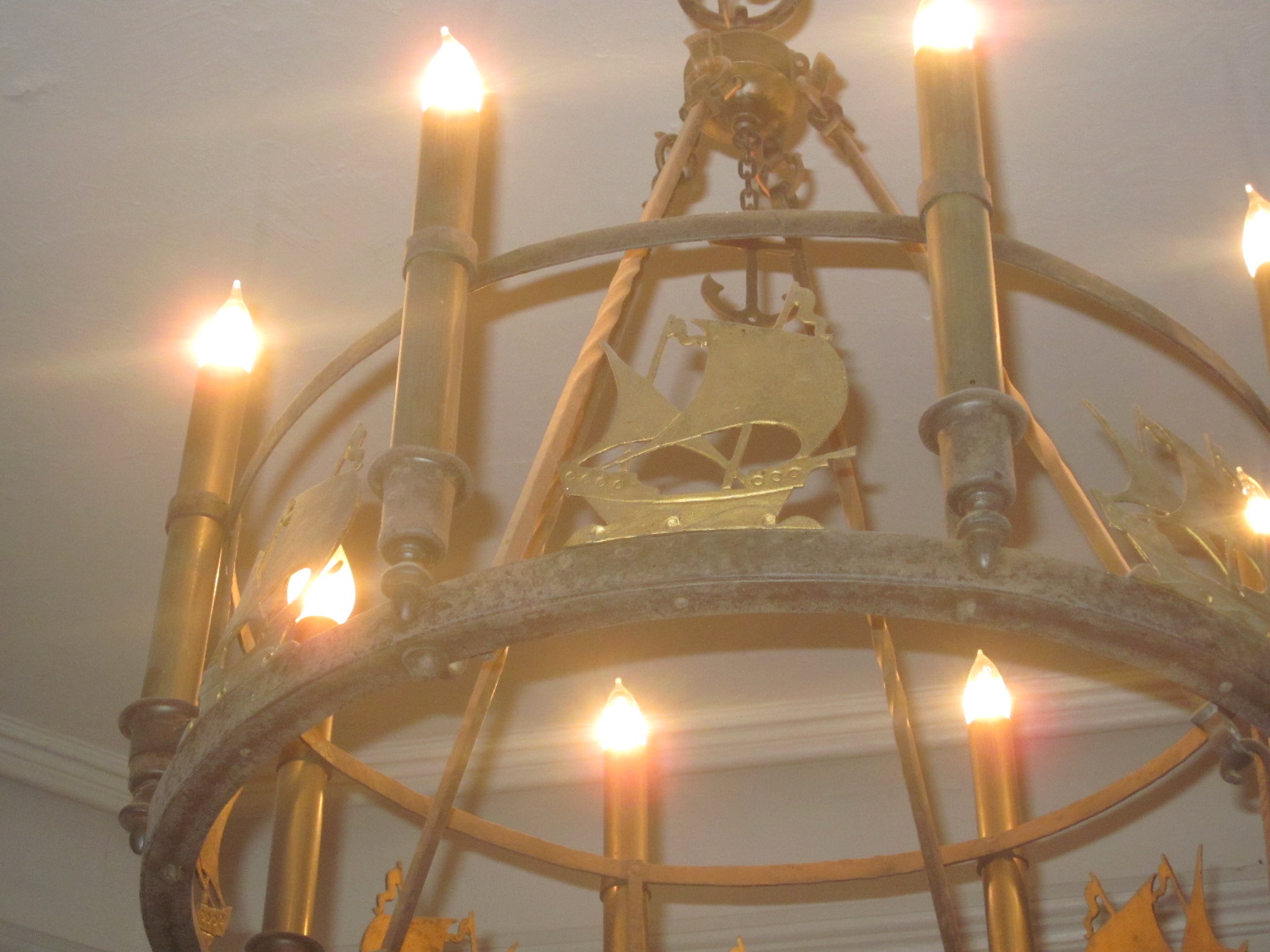 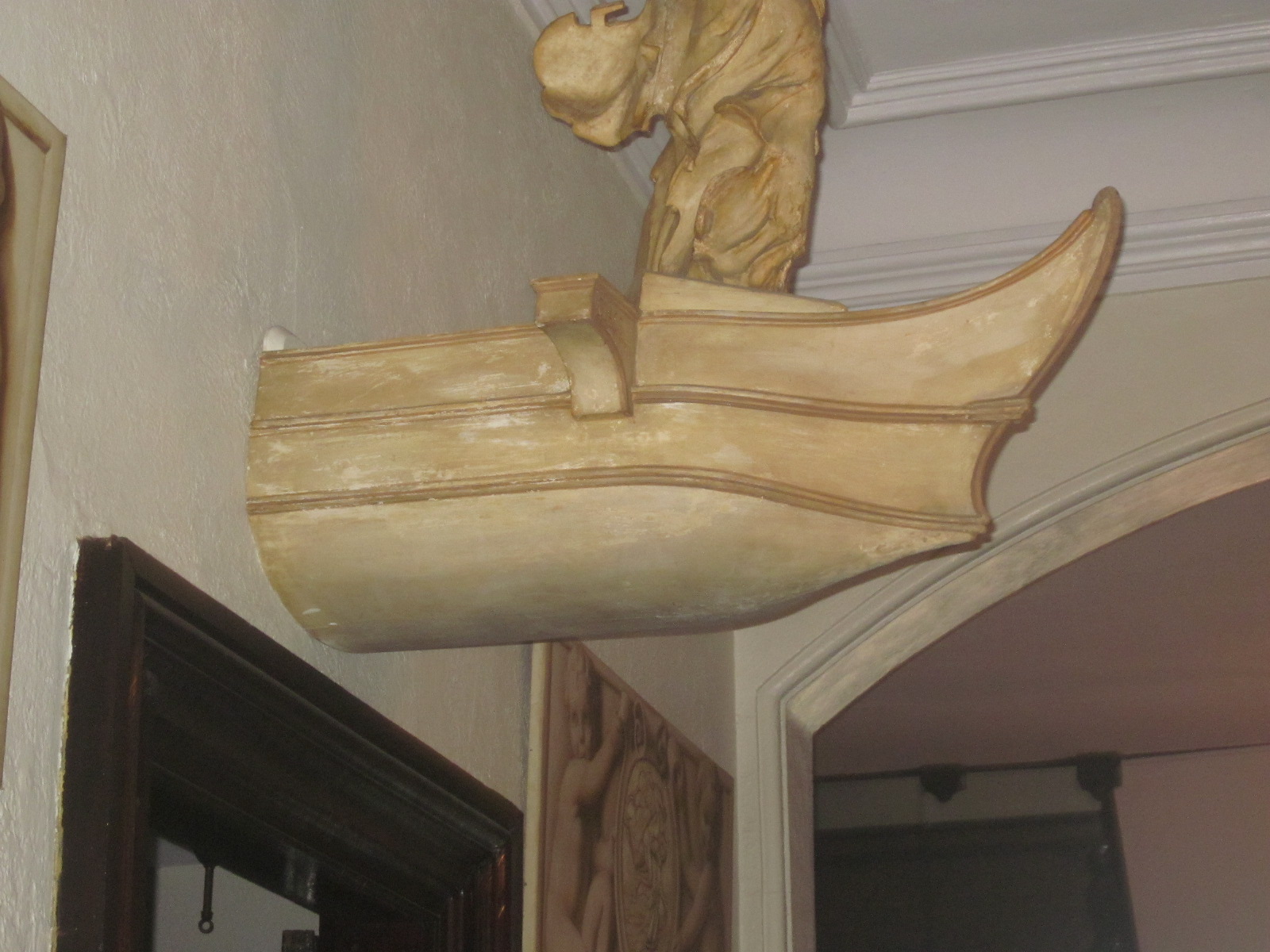 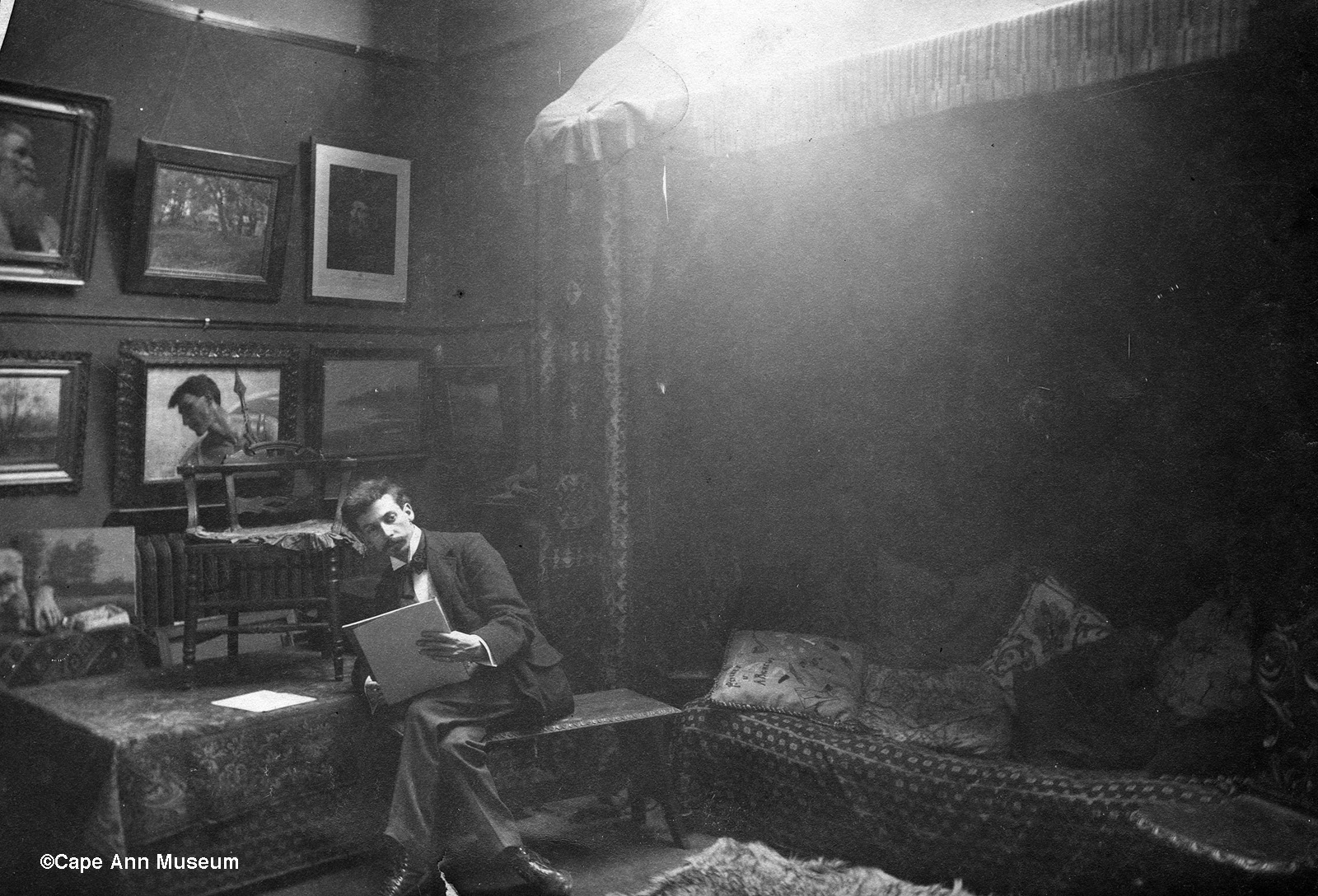