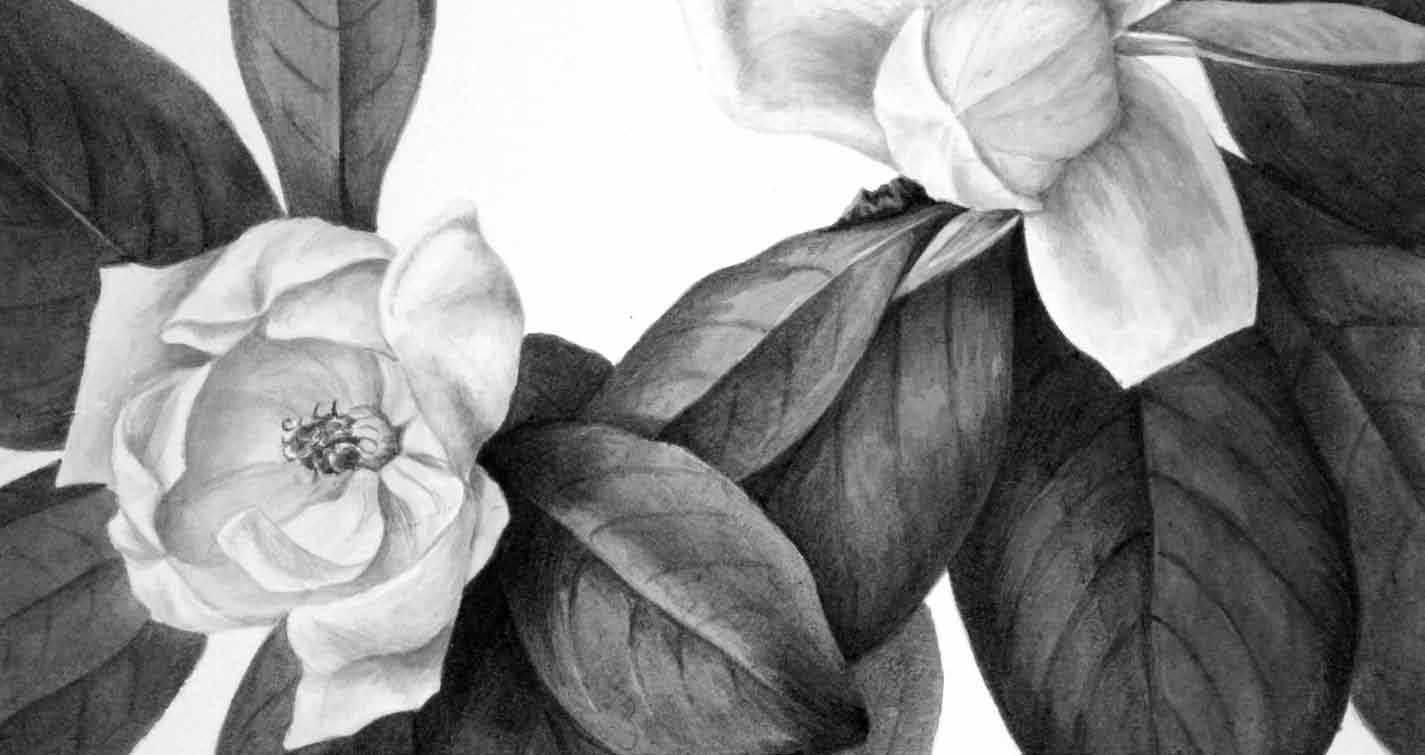 Long they sat and talked together…
Of marvelous the valley hidden in the depths of Gloucester woods,
Full of plants that love the summer, blooms of warmer latitudes,
Where the Arctic birch is braided by the tropics’ flowery vines,
And the white magnolia blossoms star the twilight of the pines!

— John Greenleaf Whittier, Excerpt from The Garrison of Cape Ann, 1857

Behind the downtown houses and above the wharves were wonderful gardens—until the fires of 1830 and 1864 destroyed much of the landscape. The artist Fitz Henry Lane’s garden was particularly praised for its sweet bay magnolia tree. Indeed, Lane was said to be the one of the “first to cultivate this beautiful and fragrant sprout of the woods” taken from its most northern native site.

Where Magnolia Took Its Name

A stand of beautiful, fragrant summer flowers on an aromatic shrub was discovered early in the 1800s. Thought to be the northern outpost of the Sweet-bay Magnolia, even Thoreau made a visit to study them in 1858. Local artist Fitz Henry Lane was said to be one of the “first to cultivate this beautiful and fragrant sprout of the woods”.

The village of Magnolia, south of Gloucester, took the name of the flower in 1876. At that time it was noted that many of the stands of the Magnolia were broken and some were being transplanted to gardens such as Fitz Henry Lane’s, while others had been picked almost to extinction. Samuel Sawyer, and avid gardener, included the Magnolia Swamp in his purchase of Ravenswood Park in 1889, by 1913, few plants were left. Today, the Sweet-bay Magnolia are protected and are flourishing across Cape Ann.

Read the article in full! Download or view the PDF

The sweet bay magnolia swamp in Gloucester, Massachusetts has been a botanical shrine since its discovery in 1806 Early New England naturalists and botanists of all types, from Henry David Thoreau to Asa Gray, made pilgrimages to the site of this northernmost colony of Magnolia Virginiana L. The local residents of Gloucester were so impressed with a “southern” plant growing this far north that they changed the name of the Kettle Cove section of the town to Magnolia in the mid-1800s. It is probably no coincidence that this name change occurred at the same time the area was starting up its tourist trade…continue reading

View some of the grand and historical hotels in Gloucester and around Cape Ann, visit the same areas today to see the same views and changes that have taken place over the century.

The Grand Hotels of Gloucester and Cape Ann (1905)

Here is a selection from the Vintage Gloucester Postcard Collection that can be viewed at the Sawyer Free library. 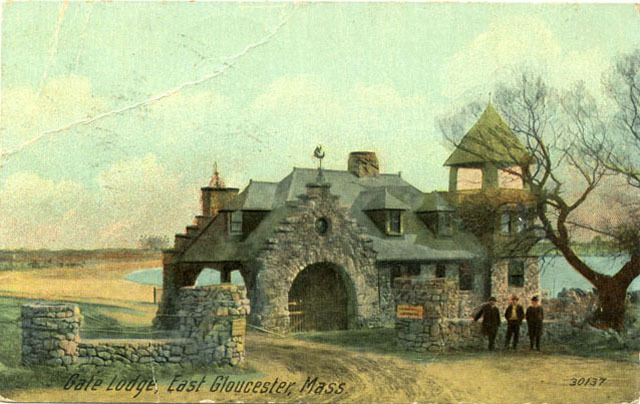 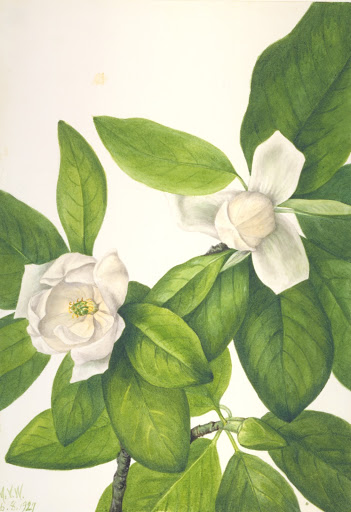 The poetical Works in Four Volumes

From the hills of home forth looking, far beneath the tent-like span
Of the sky, I see the white gleam of the headland of Cape Ann.
Well I know its coves and beaches to the ebb-tide glimmering down,
And the white-walled hamlet children of its ancient fishing town.

Long has passed the summer morning, and its memory waxes old,
When along yon breezy headlands with a pleasant friend I strolled.
Ah! the autumn sun is shining, and the ocean wind blows cool,
And the golden-rod and aster bloom around thy grave, Rantoul!

With the memory of that morning by the summer sea I blend
A wild and wondrous story, by the younger Mather penned,
In that quaint Magnalia Christi, with all strange and marvellous things,
Heaped up huge and undigested, like the chaos Ovid sings.

Dear to me these far, faint glimpses of the dual life of old,
Inward, grand with awe and reverence; outward, mean and coarse and cold;
Gleams of mystic beauty playing over dull and vulgar clay,
Golden-threaded fancies weaving in a web of hodden gray.

The great eventful Present hides the Past; but through the din
Of its loud life hints and echoes from the life behind steal in;
And the lore of homeland fireside, and the legendary rhyme,
Make the task of duty lighter which the true man owes his time.

So, with something of the feeling which the Covenanter knew,
When with pious chisel wandering Scotland’s moorland graveyards through,
From the graves of old traditions I part the black-berry-vines,
Wipe the moss from off the headstones, and retouch the faded lines.

Where the sea-waves back and forward, hoarse with rolling pebbles, ran,
The garrison-house stood watching on the gray rocks of Cape Ann;
On its windy site uplifting gabled roof and palisade,
And rough walls of unhewn timber with the moonlight overlaid.

On his slow round walked the sentry, south and eastward looking forth
O’er a rude and broken coast-line, white with breakers stretching north,–
Wood and rock and gleaming sand-drift, jagged capes, with bush and tree,
Leaning inland from the smiting of the wild and gusty sea.

Before the deep-mouthed chimney, dimly lit by dying brands,
Twenty soldiers sat and waited, with their muskets in their hands;
On the rough-hewn oaken table the venison haunch was shared,
And the pewter tankard circled slowly round from beard to beard.

Long they sat and talked together,–talked of wizards Satan-sold;
Of all ghostly sights and noises,–signs and wonders manifold;
Of the spectre-ship of Salem, with the dead men in her shrouds,
Sailing sheer above the water, in the loom of morning clouds;

Of the marvellous valley hidden in the depths of Gloucester woods,
Full of plants that love the summer,–blooms of warmer latitudes;
Where the Arctic birch is braided by the tropic’s flowery vines,
And the white magnolia-blossoms star the twilight of the pines!

But their voices sank yet lower, sank to husky tones of fear,
As they spake of present tokens of the powers of evil near;
Of a spectral host, defying stroke of steel and aim of gun;
Never yet was ball to slay them in the mould of mortals run.

Thrice, with plumes and flowing scalp-locks, from the midnight wood they came,–
Thrice around the block-house marching, met, unharmed, its volleyed flame;
Then, with mocking laugh and gesture, sunk in earth or lost in air,
All the ghostly wonder vanished, and the moonlit sands lay bare.

Midnight came; from out the forest moved a dusky mass that soon
Grew to warriors, plumed and painted, grimly marching in the moon.
“Ghosts or witches,” said the captain, “thus I foil the Evil One!”
And he rammed a silver button, from his doublet, down his gun.

Once again the spectral horror moved the guarded wall about;
Once again the levelled muskets through the palisades flashed out,
With that deadly aim the squirrel on his tree-top might not shun,
Nor the beach-bird seaward flying with his slant wing to the sun.

Like the idle rain of summer sped the harmless shower of lead.
With a laugh of fierce derision, once again the phantoms fled;
Once again, without a shadow on the sands the moonlight lay,
And the white smoke curling through it drifted slowly down the bay!

“God preserve us!” said the captain; “never mortal foes were there;
They have vanished with their leader, Prince and Power of the air!
Lay aside your useless weapons; skill and prowess naught avail;
They who do the Devil’s service wear their master’s coat of mail!”

So the night grew near to cock-crow, when again a warning call
Roused the score of weary soldiers watching round the dusky hall
And they looked to flint and priming, and they longed for break of day;
But the captain closed his Bible: “Let us cease from man, and pray!”

To the men who went before us, all the unseen powers seemed near,
And their steadfast strength of courage struck its roots in holy fear.
Every hand forsook the musket, every head was bowed and bare,
Every stout knee pressed the flag-stones, as the captain led in prayer.

Ceased thereat the mystic marching of the spectres round the wall,
But a sound abhorred, unearthly, smote the ears and hearts of all,–
Howls of rage and shrieks of anguish! Never after mortal man
Saw the ghostly leaguers marching round the block-house of Cape Ann.

So to us who walk in summer through the cool and sea-blown town,
From the childhood of its people comes the solemn legend down.
Not in vain the ancient fiction, in whose moral lives the youth
And the fitness and the freshness of an undecaying truth.

Soon or late to all our dwellings come the spectres of the mind,
Doubts and fears and dread forebodings, in the darkness undefined;
Round us throng the grim projections of the heart and of the brain,
And our pride of strength is weakness, and the cunning hand is vain.

In the dark we cry like children; and no answer from on high
Breaks the crystal spheres of silence, and no white wings downward fly;
But the heavenly help we pray for comes to faith, and not to sight,
And our prayers themselves drive backward all the spirits of the night!